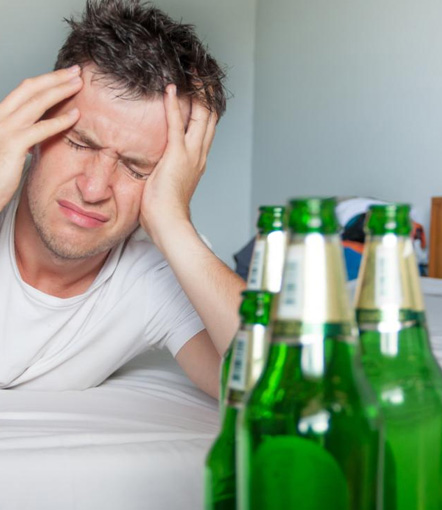 Why Alcohol Causes a Hangover

The most recent data from the World Health Organization (WHO) show that about 30% of men and 10% of women consume excess alcohol at least once a week. Also, almost 80% of young folks report consuming alcoholic beverages regularly. Here, we will explain what a hangover is and why the hangover headache arises, one of the consequences of alcohol poisoning.

To get into the dispute over a hangover, it is necessary to know why we do we have an alcohol headache and what the effects of the excess alcohol on the body are. Therefore, before speaking properly about the hangover, we will review what happens with alcohol after being ingested.

How is alcohol metabolized in the body?

When we eat or drink any substance, it goes through three stages: digestion, absorption, and metabolization by the liver. That is any food that is absorbed by the gastrointestinal tract necessarily passes through the liver before reaching any other organ. That goes for food, alcohol, medications, etc. The liver is a kind of treatment center for ingested substances. Nothing reaches the central blood circulation without first having been processed by the liver. The name of this process is “hepatic metabolization.”

Among the various roles of liver metabolization, one of them is to deactivate toxic substances that have been ingested, such as alcohol (ethanol), for example. Actually, the process of hepatic metabolism of alcohol is curious. The human liver does not produce an enzyme that directly neutralizes alcohol, so it transforms alcohol into acetaldehyde, and only then into acetic acid, which is a non-active and non-toxic metabolite.

In short, we consume alcohol, but before it reaches the central blood circulation, the liver transforms it into acetaldehyde. After rolling throughout the body and returning to the liver, the ingested alcohol can be inactivated in the harmless acetic acid.

After drinking alcohol, the end result is as follows: 92% of ingested ethanol is metabolized by the liver, 3% is eliminated in the urine, 5% is eliminated by the lungs in breathing (hence the breathalyzer test), and less than 1% leaves the skin through sweat.

What is the hangover?

The night is over, and you find the sunlight burning in your eyes. The mouth is dry and with a bitter taste. You try to get up and notice residual dizziness and weakness in the legs. At that moment, you see that a terrible headache from dehydration torments you.

As if that wasn’t enough, there is still a terrible malaise and nausea that doesn’t cause vomiting just because your stomach is empty. You run to the toilet and notice that you have diarrhea. A quick haze and the details of last night’s party flashes. Does this sound familiar?

All these are hangover symptoms that are the result of hours of exposure to toxic substances. The hangover usually arises when the level of alcohol in the blood is deficient, almost zero.

The hangover seems to occur basically for three reasons:

Does alcohol cause inflammation?

Acetaldehyde becomes up to 30 times more toxic to cells than ethanol. In the case of an excessive consumption of alcohol, there may be the presence of this toxic metabolite in the circulation for several hours after the individual has stopped drinking.

In addition, neurons are intoxicated, which makes it difficult to establish an adequate sleep pattern. The individual is sleepy, and the quality of his sleep is terrible, so he is tired. One of the adverse effects of ethanol on the brain is to inactivate the production of a hormone called ADH (antidiuretic hormone). The kidneys filter an average of 180 liters of blood (water) per day. Thanks to the hormone ADH, of these 180 liters filtered, we urinate just 1 or 2 per day.

ADH is one of the primary mechanisms for controlling the amount of body water. When it is inhibited, all the water that passes through the kidneys ends up being eliminated in the urine. Therefore, a few minutes after drinking alcohol, we begin to urinate every so often.

Fatigue, headache, dry mouth, stomach pain, vomiting in a hangover, are the symptoms that make up that picture we call hangover.

And, finally, how to fight the hangover?

The most logical recommendation would be not to drink, but we have other options such as taking vitamin B-12, consuming carbohydrates, and hydrating well, in addition to resting well. The hangover usually does not last more than 24 hours.

How to avoid a hangover?

The obvious answer is: “don’t drink.” But that is not what you want to know. The risk of a hangover is higher when there is a consumption of at least four glasses of wine or four cans of beer (or the alcohol equivalent of any other beverage) in the 2-hour interval.